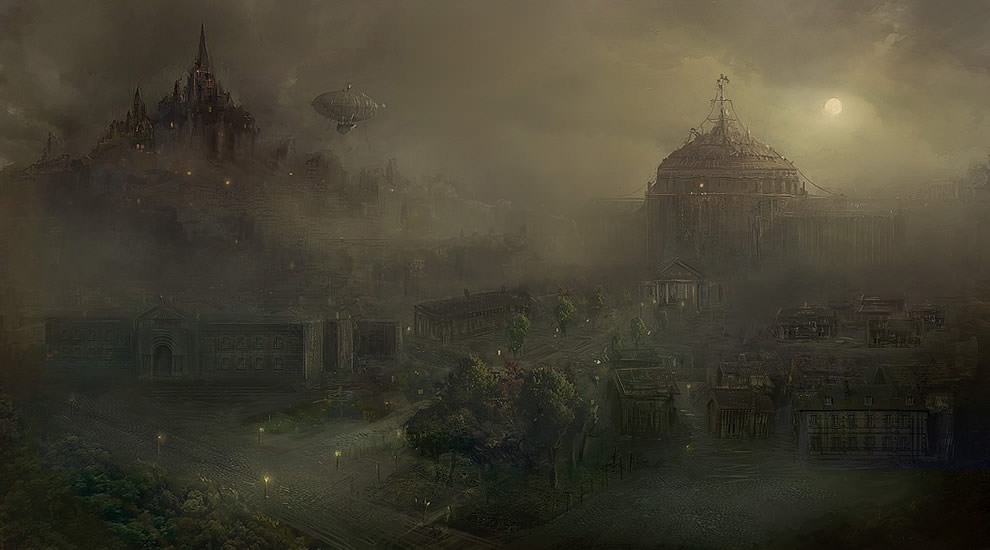 "Это ещё цвето́чки, а я́годки впереди́."
(These are just flowers, berries will come soon.)
-Volkhovian Proverb
BASICS
Lying far to the east in Empyrea, Volkhov is connected to the rest of the continent by only the slimmest of land bridges, and this single route is only made more difficult to traverse by the mighty iron wall that is Mikhail's Curtain. Behind that wall lies a land that was once lush and vibrant, filled with the beauty of nature and the splendor of the world. Now, however, it is perhaps the most dangerous place in Empyrea, a desolate wasteland of all manner of climates, desolated by the influence of destructive magics. The people, however, refuse to bow to this destruction, and have sought to rebuild with their own knowledge, with what the earth can give them. Magic will no longer corrupt their people or their land, if they can so help it.

HISTORY
Nearly 800 years ago, the final kniaz (prince) of Volkhov, Feodor IV, made a decision which would forever change not only Volkhoz, but Empyrea as a whole. Wishing to demonstrate the sovereignty of Volkhoz soil, and refusing to buckle to increased attempts to unify Empyrea, the kniaz detonated several massively powerful magical weapons upon his own soil. If he could not have Volkhoz, then no one could. What Feodor had not expected, however, was that both Volkhoz and its people were more resilient than that.

Today, Volkhov is hardly the picture of beauty it once was. It is now a magically-scarred wasteland where one must always be on their guard. Natural phenomena are a dangerous killer of themselves, and the seasons change in the blink of an eye. Abominations and beasts roam the countryside, born seemingly of nothing but nature. Foreign mages attribute this to the unfathomable influence of such destructive magics on the environment, but the true men and women of Volkhoz know in their hearts that it is simply Matushka taking out her rage upon them, for allowing her work to be so destroyed.

CULTURE
The men and women of Volkhov are, in a word, steadfast. They are stubborn, fiercely devoted to their beliefs, and absolute in their convictions. Though the march of progress has certainly brought the province forward a great deal in the past centuries, it is still not uncommon to find that small villages in the countryside still operate with technology bordering on the medieval, milling their grain with the wind and traveling exclusively by horse.

Perhaps no belief is more unifying for the Volkhovians than a singular, unilateral disdain for magic in all its forms. The motherland was scarred forever by the acts of wizards, and for many centuries all children who displayed even the slightest magical talent were either given to the bogatyr to be handled, or simply slain by their parents. Even today life in Volkhov is a great deal harder than it must be, all because of the last Kniaz and his magicians. Magic is an abomination, the force which ruined their country and angered Matushka, and it should be snuffed out immediately.

Beyond this single point, however, the people of Volkhov are not immediately easy to group into any singular culture. In the east are the less civilized folk, living in smaller villages and wandering from time to time when an area ceases to be completely hospitable. To the west are the more typical cosmopolitan folk, home to the great cities such as Goriky Nadivgorod which seem to take up the world when one is within them. Life is drastically different depending on where one lives in Volkhov, and it is difficult to pinpoint a singular unifying thread. This may have something to do with the fact that the east and west were not always a unified state, and only the warlord Grigori I united the two through his conquest long ago.

GEOGRAPHY
The geography of Volkhov is not one that could be easily described, for it seems to change with each passing month and varies wildly based on where in particular one finds themselves. On the eastern coasts, it is often a lovely place, with scenic beaches and beautiful cliffside resorts, and if one knew nothing of Volkhov's history, they might even be fooled into thinking the whole of the country is equally idyllic. Of course, the further inland one travels, the sooner they will find that things are all too wrong within this nation.

Within Volkhov lie many points which are called, for lack of any better term, Anomalies. Some of these are exceptionally minor, and one might not even notice they have found one. An area just a few degrees colder than natural forces would make it, or a place where the wind blows in the opposite direction it should. Some, however, are more extreme. Groves where the seasons are unaligned with the rest of the world, or clouds that pass overhead and turn day into night for days at a time. The worst are those which can bring harm quite easily, without a traveller even noticing. Magnets which attract bone instead of metal, single points in space which are 10,000 degrees yet emanate no heat unless touched, caves which inexplicably release sudden gusts of wind so cold that no modern technology can measure it.

Within and around the Anomalies, however, are the Treasures. These are often inexplicable items which operate outside any well-understood laws of nature, with sometimes quite terrible effects. Those few mages who have managed to acquire a Treasure say that they seem to be something akin to enchanted items, coalesced magical energy in the form of mundane objects when the weapons of the Kniaz swept across the land. The most common of these is the Black Spray, pieces of black crystal which seem to refract light in extremely peculiar ways, sometimes taking minutes at a time for light to even shine through and occasionally leading to light brighter than that originally shined on it. To the people of Volkhov, however, they are simply one more piece of evidence that magic is truly the work of evil untold.

CITIES
-Goriky Nadivgorod: The capital of Volkhov and home to the Ataman, Goriky Nadivgorod (often simply called Nadiv) is a structured and orderly place, as well as being home to perhaps the most technologically advanced infrastructure in all of Empyrea. All homes are wired with electricity, and the telephone has made communication simpler than ever before. People of all standings, high and low, come to Nadiv if they wish for a chance to change their lives, to find something new and to do more than the world has offered them.

-Rtutnygorod: The former capital under the rule of the Kniaz, Rtutnygorod (often called Rtutny) is now often considered the slums by even its inhabitants. It is a cursed place, and even travelling there is difficult due to the high concentration of Anomalies which surround it. Because of this, it is seen as the unofficial haven for Buzzards, those brave, stupid, or simply greedy souls who scour the wastes for Treasures. Due to its size and former importance, it still maintains a significant population, though technologically it is by and away the least developed of any city in Volkhov.

-Groznyjkuloy: Typically simply called Kuloy, Groznyjkuloy is, inarguably, the most normal place in Volkhov. It is entirely free of Anomalies, as its former position as a prison island led the Kniaz Feodor to ignore it entirely as one of his holdings to be protected. Because of this, it has now become, somewhat ironically, a bastion of upper class homes, where the richest of boyars keep their families. Citizens of Kuloy are no less Volkhovian than those of the mainland, of course, and if anything their loyalty to the Bogatyr is more extreme than most. The Kniaz was who banished them, of course. It would only be right to support those who overthrew him.

-Donskoy: The most major trading center of Volkhov, as well as the homeport for its 1st Fleet, Donskoy is notable for two things. The first of these is its state of the art maritime research, developing naval vessels which can only be described as cutting edge, including the Chislobog-class undersea combat ship and the Veter-2 undersea rocket. The second of Donskoy's distinct honors is its place as the home of Volkhov's largest crime family, the Alborg. The Alborg were at one point Bogatyr, but were removed from office by Kniaz Feodor for corruption, but their roots run exceptionally deep. Indeed, some say that their ability to stay in power is due to dealings with the Bogatyr even now.

LAW
The law in Volkhov is rather simple. Indeed, there are no official laws of any sort against the vast majority of what might be considered "crimes." The Bogatyr's approach to governance has shifted drastically from the tyranny of the Kniaz, and any law one might find has almost certainly been put in place by the Boyar of a region rather than by the Ataman over Volkhov as a whole.

Of course, just because only the most direct violations of personal rights are considered universally illegal, this does not mean that the Ataman wishes for the people to live in fear of crime. Volkhov believes in the justice of the people, and it is rare in the extreme to see the Bogatyr interfere in, say, the lynching of an abusive father. it is better to allow justice be done outside their hands than to know justice is failing in their hands.

WHY VOLKHOV
To be quite blunt, Volkhov is for those who wish to explore a different side of life in a fantasy setting. It is populated primarily by humans, a race already poor at magic, and its culture scorns the idea in its entirety. Magic is the enemy in Volkhov, not a tool but an agent of one's own destruction. Its people have suffered directly as a result of magic, and in turn have scorned it entirely.

Those from outside Volkhov certainly have plenty to do as well, however. The nature of the Anomalies and the Treasures leads to a decided draw of mystery and excitement, to see what sort of beasts they might fight or untold riches they may make. Even beyond this, however, the culture of Volkhov provides ample opportunity for roleplay of a more grounded sort. The use of magic is frowned upon in the extreme, and so its very use to solve problems may only lead to further trouble. Volkhov is the definitive place to be for most characters to be entirely out of their element.