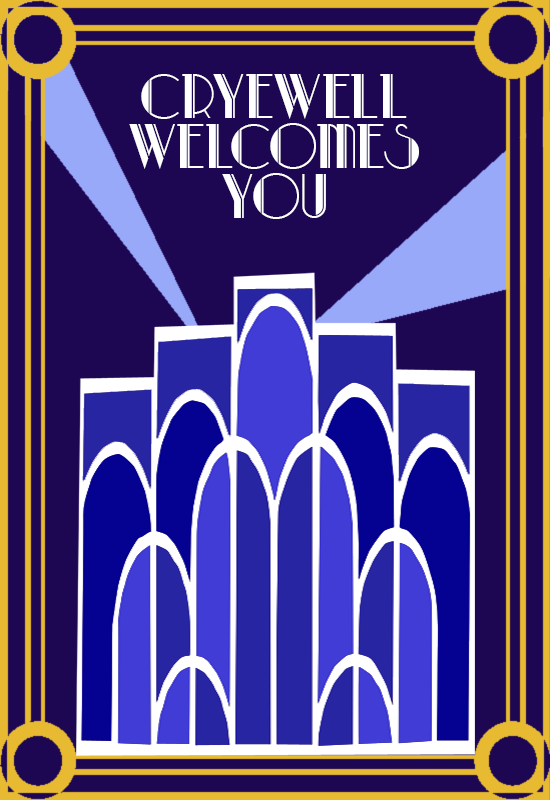 Cryewell is the westernmost province of Empyrea. It is home to a culture of fast aestheticism. Faster, flashier, larger, and louder is how things get done in the province. Things are free-flowing within its strict boundaries. It's a place where even the highest echelons of society are just as scandalous and apt to back-stab as the lowest. But it doesn't matter what parts of society someone from Cryewell is from—all know that everything can be lost in a moment, so enjoy what you can. Mortality is a prime precept of life—and remembering it is a prime precept of Cryewell.

Most of Cryewell's cities look similar. As Cryewell is known to have circular (or at least rounded) motifs, many of its architectural designs are rounded. At the least, 90-degree angles are hard to find. Even more modern buildings designed to be economic in construction do not have sharp angles. The exception is mostly in industrial cities such as New Cinderport, where the sharp angles are there to maximize limited space on its marshy coast. All major cities are connected to another via the complicated multi-tiered rail system—except for those on the distant isles like New Cinderport. Cryewell cities are sometimes located in some of the strangest places, such as Eboncairn being located on tall, steep-cliffed islets. One of the notable factors of these cities is very few have "historic" structures. In fact, the oldest notable structure in all of Cryewell is the Wyrmgate Bridge in Ashgarde—and it is barely 200 years old at this point. Many of Cryewell's cities have been razed before, which is what has led to their perpetual "live in the moment, but plan for the future" attitude.

It is almost a culture shock when traveling from the two neighboring provinces, as it seems like there is nothing but hustle and bustle. Even farming is done in strange patterns to be aesthetically pleasing. Cryewell, despite being a rather progressive province, usually only accepts new technology after it can be put within aesthetically-pleasing forms. For example: although they rely heavily on the provincial rail system for transportation, Cryewell trains are actually less efficient than the natural Empyrean standard. This is because the technology that powers them can be safely re-tooled to be more sleek and fitting with the Cryewell aesthetic standard. For new technology, it is not uncommon for oversized yet aesthetic containers be placed around them just so it is not an "eyesore."

Cryewell's aestheticism also applies to fashion. Fashion is usually sharp and calls attention to some part of the body. The specific part may change from year to year. Vibrancy and abstract patterns with high-contrast colors are usually always in style. It's rare to see greys and browns in anything but official, professional designs. Tattoos are usually done only in black or another high-contrast color to make them stand out. What might appear as gaudy in another province is probably standard attire in Cryewell.

Cryewell's main philosophy is that of living in the moment while preparing for the future. It is the idea of putting a small portion of coin aside for emergency, but spending the rest on what you want now. It is understanding that in an instant, life as any Cryewell citizen could end—and embracing the joy of living rather than the fear of death.

Cryewell is home to the Spartenai, spectacular coliseum-style events held in most major cities. These cities have a single coliseum where beast is pitted against beast, man against beast, man against man, or man against technology. Usually it is a loud, dangerous, but exciting event that keeps many entertained. Spartenai are usually held on a monthly basis between cities, giving the event coordinators time to prepare new acts. Participants are usually people who don't have much to lose or those who are truly confident in their abilities and are regarded as celebrities even if they themselves might not own anything but the clothes on their back.

In terms of racial makeup, Cryewell is one of the few places on Empyrea with Dark Elves being in concentrated number. Humans are also found in Cryewell in decent supply. This is because of Cryewell's "forward-thinking" philosophies. Dwarves and Aetherlings make up the third-most populous groups, although their numbers combined barely beat out total humans. Skinwalkers are also fairly rare due to the buildup of Cryewell's wilds. Fallen have a higher population percentage here than anywhere else on Empyrea due to Cryewell's culture.

Cryewell is a province in which many of its cities aren't far from the Hydrac Ocean. However, the majority of its coast are jagged cliffs. Only the western and north-western portions of Cryewell have proper beaches for any substantial distance. There are small port towns along the jagged coasts, but there is rarely enough land to sustain a city of any size. Part of Cryewell is taken up by the Crescian Sea. The coasts of it are far from the jagged cliffs of the oceanic coasts—as it is almost a constant beach. What isn't beach is marshland or outright swamp. Most of Cryewell's flatter, more farmable areas are towards its outer flanges, far from its neighboring provinces.

The government in Cryewell is an aristocratic republic. There are six families which sit upon the Umbral Board, with the Chairman of the Board also representing Cryewell in the High Council of Empyrea and becomes the de-jure leader of First Twilight. The Chairman is elected from the six families every six years by the citizens of Cryewell. Many times, a single Chairman will serve for two or three terms in a row—if not more. Unknown to most, it is also possible for an outsider to throw their name into an election. By paying an extremely large sum as an entrance fee, any citizen of Cryewell can be put on the ballot. If one is elected, their family is added to the members of the Umbral Board. There have been two cases of this happening in the past, so it is possible for someone to do it. Any entrance fee is added to the taxes and usually goes towards a large-scale public works project.

Laws in Cryewell are surprisingly lax. Murder is, strangely, allowed. It is the motive that is punishable. Someone who has been attacked is freely able to exact revenge with little to no legal repercussions. Even personal slights could be a legal reason for the taking of life—although it is harder to prove. Just being cut in front of in line does not constitute such a thing, but being publicly humiliated is. Bribery is also not strictly illegal, but it is frowned upon by most. The only people it is illegal to attempt to bribe are keepers of the peace, emergency personnel, or military personnel. Anyone else is fair game.

Why make someone from Cryewell? Cryewell is where the the elite and the underbelly are usually one in the same. Those who rule have both legal and extra-legal power to a point. Fashion is high and modern. It's crisp, clean, and downright snazzy. If your character appreciates art, fashion, or wants to be in a setting like 1920s and 30s New York City (without the Great Depression), Cryewell is the place to be.

Why RP in Cryewell? Blackmail and black ties, garrotes and galas, sharp suits with sharper knives—that explains Cryewell to a T. There is always some sort of high society dinner going on—and when there's high society goings-on, the lower dregs of society are surely copying them. While it may seem like it's a constant party, Cryewell is definitely not always that. Although aestheticism rules the country, people coming from outside of Cryewell are usually in for a pleasant culture shock when they experience the beauty of technology and what mortal hands can create.