Appearance
Appearance Description: Xozah's overall appearance is very average. Her hair is a black color, often compared to a raven's feathers, which accompany her sea blue eyes. She has a bit of mixture in her blood, causing her eyes to be a bit tilted. Xozah prefers to keep her hair long and unkempt, the texture of it being scratchy and dry yet it flows in the wind like silk. When it comes to the shape of her body, voluptuous is the word that best describes her. Her breasts are on the larger side of the spectrum, often being the first part of that enters and exits the room. A perfect hourglass is how her torso is shaped, having all the curves in the places where it matters. Her backside is also average sized and average shaped, like some other parts of her. When it comes to her definition, in short, Xozah is ripped, or, in a more formal tone, defined.

Clothing-wise, Xozah likes to keep it loose, to reflect her personality. While she's against wearing shorts or dresses, unless it's a formal event, it's more common to catch her in some short pants and a loose shirt, normally without a bra or anything to keep her chest in place. Cleavage tends to be a trend amongst her outfits as well. There's also a tribal tattoo on her upper left arm. 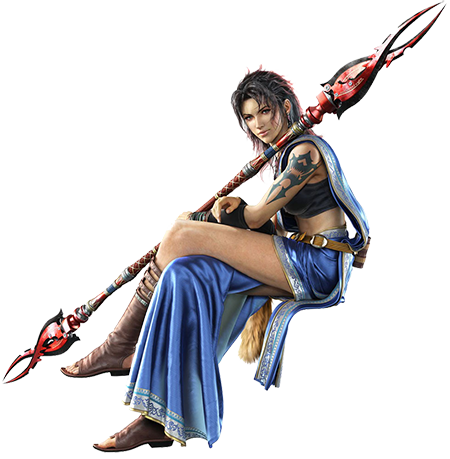 Personality
Personality: To summarize her personality into a single stereotype, Xozah would be the rowdy and loud type. But putting her in a category wouldn't really due the character justice.

So first, to touch on that side of her, Xozah is a very loud person and she is fully aware of this. The reason why she tends to be yelling or very obvious is because it makes those she hangs around with, which tends to be the more quiet and reserved type, uncomfortable. Xozah finds humor out of other's misery to an extent. To pair with her loudness is her disregard for objects and just the environment around her. See, Xozah isn't the smallest of woman, and with that in mind it becomes hard for her to watch where's she going most of the time and thus she just kind of bumps into things and hopes for the best. This side of her is most predominant when she's hanging out with her close friends. This carelessness becomes recklessness when she's on the battlefield, Xozah often forgetting who's friend and who's foe in large scale battles because it becomes harder for her to track every single person and takes too long to figure out who's side they're on. All these traits combined make her a very simple person.

But there's more to Xozah than just that. She's a leader at heart, often a mother to those who don't have one. She can't really help it, she hates to see those in need of help or guidance continue to drive their life into the dirt. This is how Xozah ends up taking helm of most groups or organizations she's in. Her personality is too large and out there to just stand on the sidelines and watch as the big boys get to play. Building off of that thought, she isn't a bad leader either, or at least she thinks so. See, Xozah believes that if one were to lead they need to focus on the people first, the country second, and their self lastly. As one can tell, this is a very selfless approach on how to run anything.

Smaller traits that stand out is her perfectionism. Xozah as a person hates to leave things unfinished-- and she also hates to start them, leaving most to just assume she's a lazy person-- and she hates to do things half-assed, so most if not all tasks end up taking longer than normal.
Likes:

History
History: Before the birth of Xozah there was a tribe that inhabited the province of Cordollan known as the People of Vǫlvafold. This said tribe was run by a chieftain who chose his wife instead of meeting her and then proceeds to impregnate her to his hearts desire. While this sounds barbaric, which they were, there was more in-between that would take too long to explain. Xozah's father was the 3rd chieftain, with Xozah being his first born. Xozah's name, before her birth, had no meaning, it was just a name that he had came up with on a whim though later he would give it the meaning of "ending to all means".

After her would come 4 others until the eventual death of her mother, who prior to being married to the chieftain was the strongest warrior in the tribe. With the lack of a mother figure, most of the responsibilities fell on Xozah since her father was too busy running a tribe. And even though he was barely there for her or cared much for her, Xozah had idolized her father from the stories that those in the village would tell her. See, as the heir and next in line to become the next chieftain, unless something happened like a trial by combat, she had to be well liked and as strong as if not stronger than her father to keep the tribe in a forward direction; but there was one problem.

She couldn't use magic.

Magic was a pretty common thing in the tribe, almost every warrior had a special one they had been trained in along with physical combat while even the everyday person knew some simple spells for use around the house. But not Xozah. She couldn't even do as much as muster up a small spout of water or a short gust of wind or the smallest amount of heat. She was, in short, disabled. Though she didn't let this disability define her.

Xozah worked the hardest out of everyone in her family and her tribe. By the time she was 12, Xozah was allowed to go with the warriors on an event they call The Hunt, an annual event where they tribe enters an extremely dangerous forest in search for food in the winter. It basically makes a game out of hunting for food. That first year she came in 5th out of 10 people. The next year she came in last due to bringing bear meat, which was inedible. Although, that did grant her the epithet "The Godslayer" and her magical item, Fang of Zezi, a fang from the tooth of the bear she killed which was, allegedly, the minor deity Zezi, the bear goddess.

After that, nothing much had really happened until she was 16, in which her father was beaten in combat. Remember the first Hunt Xozah participated in? The 1st place winner from that Hunt returned with a hunger for power. Since by this timer her father was in his mid 30s, old by the tribe's standards, he was killed and there was a new chieftain who had picked Xozah to be his wife and banished her siblings. Xozah was only 17 when she had her children, triplets, which left her with an injury on her pelvis that gave her a permanent limp. She would end up having twins when she was 22.

Only recently, about a year ago, Xozah challenged her husband. She won, obviously, but ended up killing him when she only meant to maim. This left her a widow of 5 children and the chieftain, but just any chieftain as she was the first female to hold the title. This position put more weight on her shoulder so she's been training and readying herself to bear that weight with ease and any weight that would be added on.

Average Cooking: While it isn't something essential to her theme or kit, Xozah is known for her pretty mediocre cooking. And what means is that while she can cook, she kind of has to for her children to survive, the food isn't necessarily amazing but it doesn't taste like absolute garbage either.

Expert Polearm Proficiency: Since she was young, Xozah has preferred to wield polearms over the popular and over-used sword. This was mainly due to personal preference, preferring the reach and wide area of attack while also being somewhat light-weight depending on what she was using. In terms of skill, Xozah is classified as an expert, knowing the ins and outs of all forms of polearms and is able to wield any of them with ease. She is also able to perform a handful of styles and techniques meant for a polearm with any polearm, even if it's not the intended one.

Superhuman Strength: Due to the effects of the Power enchantment, Xozah has grown past the normal peak of a human. While those without the enhancement would be able to lift up about 300 pounds, basically applying more than 600N of force, Xozah is able to lift 550, applying a little over 1100N of force to counteract both gravity and the object. This is bound to increase as time goes on.

Novice Hand-to-Hand: While it was a main focus for her earlier training, Xozah has declined in her ability to fight others barehanded. She knows the basic of movements but besides that she can't do anything special.

Fang of Zezi:
Type: Necklace
Rarity: One of a Kind
Location: Cardollan
Appearance:

Lore: This tooth had belonged to a bear that Xozah had killed when she was 13. This bear was known to her people as Zezi, the goddess of bears and strength, comparable to Hercules in terms of power and popularity. While Zezi was killed in that instance, it doesn't mean that the goddess in necessarily dead, just in the process of reincarnating.
Function: The Fang of Zezi has two main abilities.

The first is simply known as Power. While this is not the only item in the world that has the enchantment of Power, the Fang's effect is pretty much the same. Basically, while being worn it allows the user to exceed the normal physical limitations on strength, allowing for them to become as strong if not stronger than a supernatural being. This mainly works on humans but it shown to affect other races as well.

The second ability is known a Nature's Prophet. This ability enables the user to speak the wildlife. This includes both plants and animals, basically allowing her to command nature itself.
Price: N/A

It’s not like it was a hard choice; it was pretty obvious from a while ago that she was going to leave. There wasn’t a problem with the Gotei, it was more of a problem with herself. She was an outlier and the cause of said problem, so the best way to deal with it was to just remove herself from the equation.

And oh man did she get a mouthful when she returned back home. News seemed to travel fast and anyone who was in the estate that day knew about it, and all of them had something to say. Chidori being Chidori didn’t listen to any if not all of them, blocking out the constant pestering like it was just background noise. She didn’t really speak to anyone before she left either, only returning to get her things, that thing being a new change of clothes and her Zanpakuto.

Fast forward to now, where our heroine has placed herself in a somewhat odd place. Rio de Janeiro, Brazil. A city filled with people and always bustling, a good place for Chidori to lay low. With the mass amount of people in such a small place, pinpointing where she is would be nearly impossible unless you knew her habits. For example, exclusion as she found herself a small hut in the mountains, looking over the city. There was a word for a moment like this.