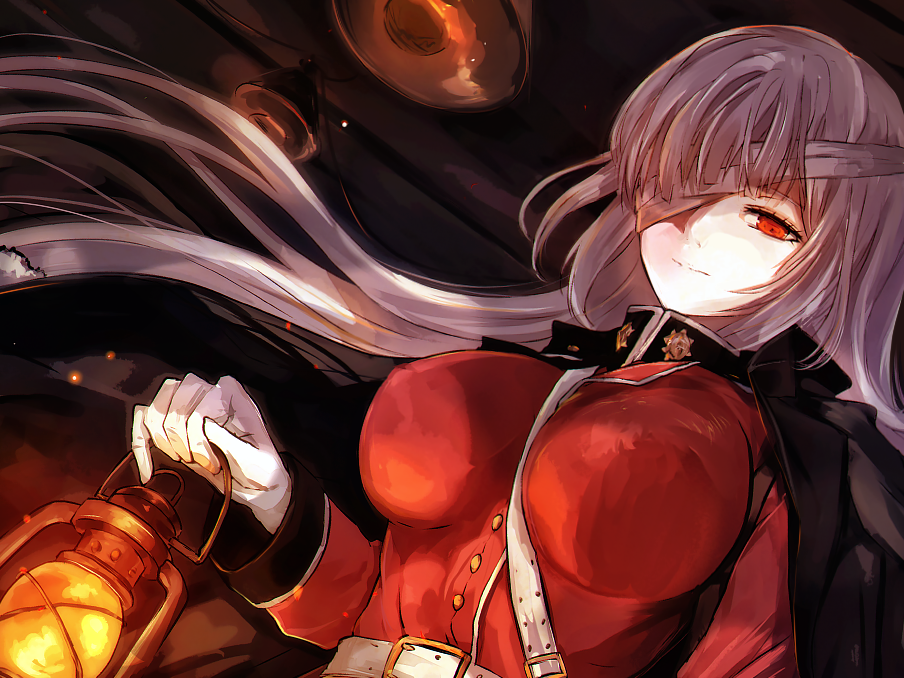 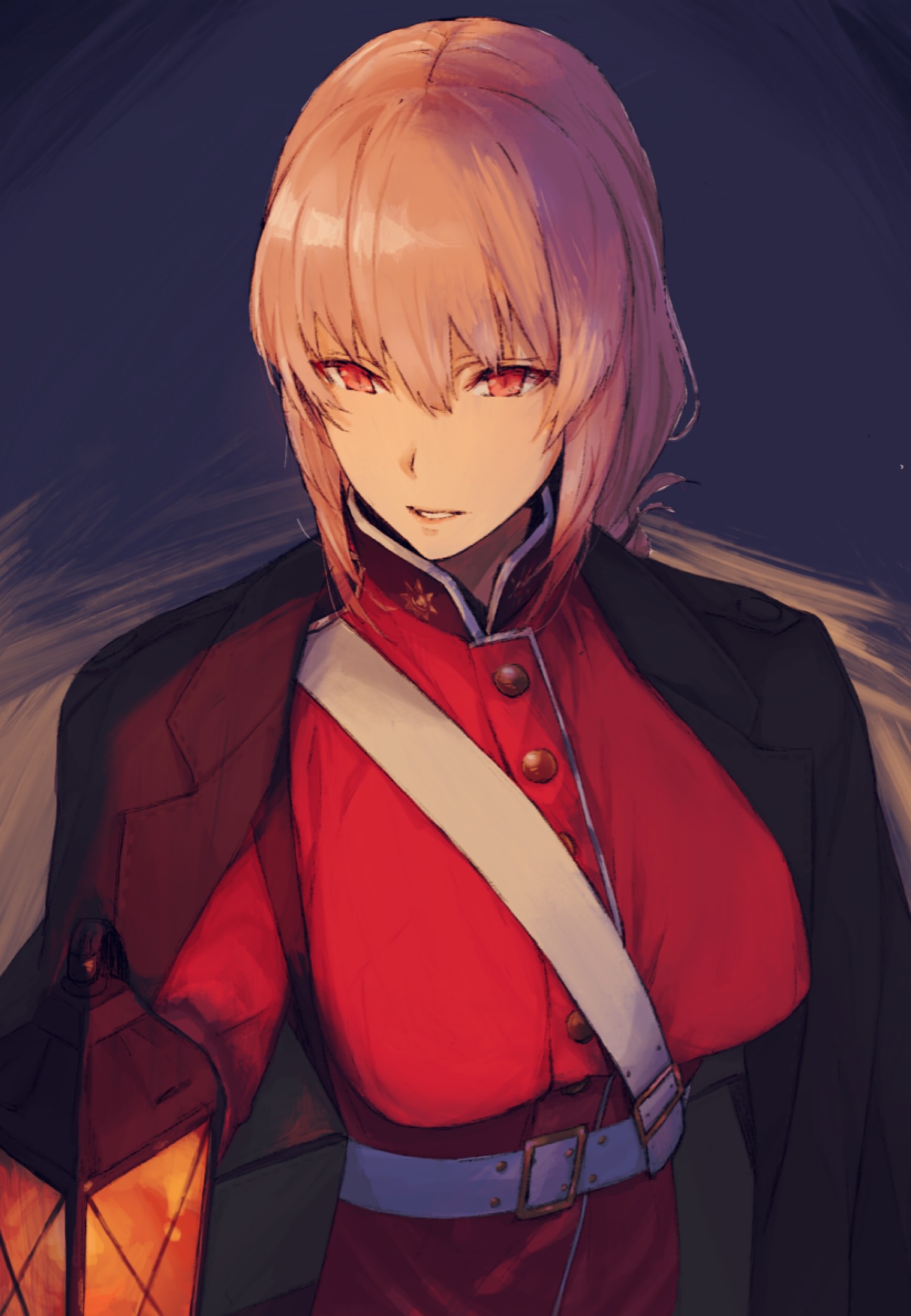 Personality
-Personality: While it might surprise some for a hardened Buzzard to be called something as endearing as "Matushka," Yekaterina has certainly earned the nickname. She is known to all Buzzards as the one who will treat anyone she finds wounded within the wasteland, and she will do so with a kind smile. She does not wish to see any suffer such an awful death as one found in the wastes, no matter who they might be. Of course, just because she treats the injured with kindness does not mean she will fail to defend herself, or indeed will she even avoid killing. Yekaterina is a mother in the truest sense of the word. Though she cares for those she finds, she is also willing to administer discipline to those Buzzards she believes have earned discipline or death. Much like her namesake, she is at her most terrifying when she believes her kindness has been taken advantage of, or her work has been undone.

If there is a single phrase which is known to strike fear into all Buzzards, it is the phrase that first gave Yekaterina her moniker of Matushka: "A nu, chiki briki i v damke." Translating to, roughly speaking, "One, two, you're on top," the phrase is an idiom of unknown origin, certainly older than anyone alive and likely from some children's game or story that has been lost to time. Often said when one has gained the advantage of some kind, it is Yekaterina's only warning when she finds someone has earned a bit of discipline. Though she is all too willing to let go someone who submits to her, any attempt to ignore her is quickly met with a swift shot through the skull, something she considers appropriate poetic justice. Anyone with enough knowledge of the Volkhovian language would note, through a subtle bit of wordplay, the underlying second meaning of her warning, and the one she considers far more pertinent: "One, two, bullet to the head."

Though it is not something quite as well-known about her as her care for the injured, those who have met Yekaterina know that her commitment to the hunt for Treasures is perhaps second to none. She longs to hunt down each and every Treasure she can find, and the veterans who have gone with her to seek them out can tell that not even her own safety seems to matter as much. They say it is a miracle she even lives for how unflinchingly she searches, and yet in spite of all this, she never seems to keep these Treasures for herself. Where they go, truly no one knows.
-Likes: Treasure hunting, the balalaika, tea with jam, flatcaps.
-Dislikes: Being interrupted, outlanders, discourteous behavior.

History
Born to a very minor Boyar and his most trusted concubine, Yekaterina never had much of a hope to inherit the family name. This was not because she was a woman, of course. She simply lacked the birthright, and so rather than spending her time in youth trying to prove she still had the personal qualifications, she opted instead to research something entirely more interesting to her; the devastation of her homeland.

Had she been a proper heir to the family, it is likely that Yekaterina's pursuits might have been considered unacceptable by every self-respecting member of the Isaenko, and perhaps even the Bogatyr as a whole. But she was simply an illegitimate daughter, free to do as she would, and it took very little time at all for her to begin requesting retinues and allowances from her father for excursions into the wastelands. He obliged her, of course, if only to have her away from the home and, perhaps, in the hopes that one minor headache might simply be taken away from him. In a way, his wish would be granted, but perhaps not how he had expected.

Yekaterina's first voyage into the wastes went remarkably well, far better than most rookie Buzzards' first trips. Her entire retinue perished to a wide assortment of Anomalies, but she hardly saw so much as a scratch. When she returned, she brought with her the first Treasure she ever found, and one that has stayed with her since that day; the Float Fly. Among the more seasoned Buzzards, it was whispered that perhaps Matushka herself was keeping a close eye on this greenhorn. They would have to wait and see, of course, but Yekaterina would not disappoint them.

Time after time, Yekaterina entered the wasteland and returned with far more than she had begun the journey carrying. Perhaps it was a Treasure, maybe even two or three, or maybe it was a group of Buzzards she had come across and nursed well enough to return them home. It was abnormal to say the least, and every Buzzard she saved told much the same story: She was abnormally calm even in the most bizarre of situations, and always worked to save those she could. Yet the moment things turned sour, she did not hesitate to take a life. The older Buzzards heard all of this with some surprise, but it is difficult to surprise one who has spent their life wandering Volkhov's desolate lands. As a sign she had truly become one of the Buzzards, a nickname was offhandedly assigned to her based on a single joke, for those are the names with the most meaning.

"Scary and gentle, eh? Is she a Buzzard or your mother?"
Skills and Equipment
Skills:

-Buzzard Queen: Being one of the most widely-known Buzzards in Volkhov, it would certainly be bizarre if Yekaterina did not live up to that reputation. She is exceptionally skilled at traversing the wastes of Volkhov, and recognizes most Anomalies simply from its effects, or even its aftermath, and has not fallen prey to one in many years. Her ability to scavenge and to live off of nature's bounty is made only more impressive when one considers the nature being lived off of. She is also exceptionally skilled at determining the nature of a Treasure through only a few days of trial and error, much less than the often deadly weeks a novice might spend.

-Medic: While she is known for her medical knowledge, the truth is that Yekaterina is hardly a master of the healing arts or any such thing. She simply has a great deal of experience as a field medic, and can generally save people from the brink of death, though this hardly means they will not need proper medical attention when they return to civilization.

-Pilot: As a former Bogatyr, Yekaterina is well-acquainted with most of the common vehicles of Volkhov, and can drive them with a fair bit of proficiency. While she is fully capable of piloting ships and planes, she is most comfortable with simple cars.

-Black Spray: A very common Treasure, the Black Spray takes the form of a black cube which seems unnaturally dark. When Yekaterina holds a light source to the Black Spray, it will, after a delay of several minutes, expel a much brighter light from all of its surfaces.

-Float Fly: One of the only Treasures that Yekaterina has chosen to keep for herself, the Float Fly takes the form of an antiquated pepperbox pistol, and according to her was found deep within the wastes. Its actual effects are quite simple, as when this gun is fired, the bullet stops immediately after exiting the barrel, floating in midair indefinitely until something makes contact with it. Upon making contact, the bullet will resume its flight path as if it had only just been fired. This makes the gun quite useless in firefights, but stunningly effective for setting traps, and this is a far more useful application of any weapon to a Buzzard.

-41-d Submachine Gun: A standard issue firearm of the Bogatyr, the 41-d's bullets are designed to pierce most forms of body armor at the expense of actual wounding by each individual bullet. Its drum magazine can hold 100 rounds, meaning that it tends to be used in a spray of bullets rather than for any accurate fire.

"Magic"
-Evil Eye: The Evil Eye is a condition that is found in a handful of children every generation in Volkhov, and cannot quite be called good or bad for whoever may have it. Village elders often refer to it as a sign of Matushka's gaze upon them at birth, destining them for great heroics or great evils. The truth of the matter is that, put simply, a child with the Evil Eye has been born as a Treasure themselves, allowing them some manner of strange power like any number of occurrences in the wastes.

For Yekaterina, the Evil Eye takes possession of her right eye, and as such she often covers it with a bandage to prevent its activation. When removed, she is able to clearly and visually see the movement of magical energies in the world around her, and this is the secret to her skill at navigating the Anomalies of the Wastes and identifying the nature of Treasures. While it would certainly also allow her an advantage against magicians, she has thankfully yet to meet one of their wretched kind.

I hope you have fared well on your journey. Before I say any more, I must ensure that this is made clear to you: All that you read in this letter is to be shared with no one, not even your fellow Emerald Magistrates. This is of the utmost importance, Zhao.

Now then, to the matter itself. I, Akane, Empress Hantei XLIV, have deemed you my choice to serve as my consort and, in time, husband. I am sure you are quite surprised by this news. It is right for you to be, after all. A mere Mantis bushi, chosen to be the husband of the Empress? I confess, I am as truly surprised as you must be, but I have found myself thoroughly taken by you. Your strength, your stoicism, your dutiful service to Rokugan, all of this and so much more has fed into my decision.

If you feel so inclined as to honor me with your agreement to these terms, then upon your return to the Imperial Court, show the brooch I have sent alongside this letter to either of the guards at the gate to the throne room. They will permit you entry, but no others, of course. Truly, I cannot stress it to you enough, but this must be kept a secret from all. Agents against the throne are everywhere in these times, and it would only cause further chaos in the court and the Empire as a whole were this decision of mine to be made public.

Tier: 3-3
Class: D
Skills Given: 1 Trained, 2 Beginner, 2 Untrained
Comments/Notes: I am allowing this character to take ONE of these "untrained" and turn it into a "trained" skill level for a mental skill only.
Current date/time is Thu Jun 04, 2020 6:55 pm