Personality
Personality: Akita is a quiet person to those that first meet her. She is a distant young woman that spends most of her time between her mother and Liu Xuanzang depending on who she is with at the time although she is usually with her mother whenever they are in Naezri but as Masami likes to spend some time in other provinces and explore it is those times when she will usually be found in Guanghua. She enjoys peace and quiet, not liking a crowd or stressful situations.

Because of her preference for environment she much prefers smaller villages or secluded wilderness to explore when she does. It's not about the thrill, in fact she does a lot of work to avoid thrills or situations which would draw out the lesser seen traits of her personality that stems from a curse passed down through her blood. Akita's personality can degrade and take a turn for the darker side when exposed to triggers. Due to the curse in her blood she can potentially turn into a berserker with sadistic and cruel behaviour, such traits show up when she experiences feelings of stress, anxiety, rage and despair as well as arousal. Because of this Akita tends to try and remain positive at all times and neutral.

Due to the curse being suppressed by some seals that were applied to her to help lower its impact she is able to experience some of the previous emotions and feelings without going completely nuts however being pushed far enough will quickly make her lose her morals and turn on anyone whether they be friend or foe in her eyes.
Likes: Meditation. Peaceful. Food. Fishing.
Dislikes: Noise. Cities and Towns. Anxiety. Surprises.

Polearm User
She is trained in the way of the spear and long-reaching weapon. She is quite adept with using them in close combat although her aim is off when it comes to throwing something such as a spear. She specialises in using a naginata specifically but the same principle can be applied to a spear to an extent. She is not the best in this area of combat and nor would she claim to be a master at anything but it's one of her more noticeable strengths.

Swordsmanship
Equal if not better than her use of polearms she was trained by her mother from a young age to be a skilled user of the sword. Specifically a katana is what she started on and has gotten quite adept in using it 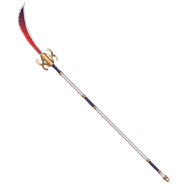 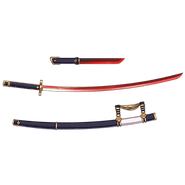 Magic
Novice
Akita is unskilled in magic although she has the potential to do it. She is able to activate seals or trigger magical effects but she cannot directly create them herself at her current level of training.